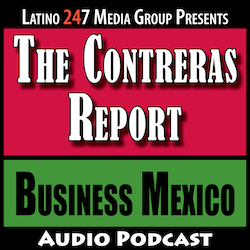 MEXICO SHUTS DOWN FOR CORONAVIRUS- In all, 18% of firms in Mexico are considered essential and are allowed to stay open. Alcalde said that of the remaining nonessential firms, 87% had closed and 13% had refused to do so.

Under U.S. pressure, Mexico pledged Friday to reopen automotive plants in a “gradual and cautious” process. On Monday, Labor Secretary Luisa Maria Alcalde praised some automakers for reducing or stopping nonessential parts of their operations.

The U.S. government launched a campaign to get Mexico to reopen plants, suggesting the supply chain of the North American free trade zone could be permanently affected if they didn’t resume production.

Mexico’s border assembly plants are key to the U.S. supply chain, including those of autos and defense contractors, and employees at some of the facilities have staged walkouts and protests because of fears over the coronavirus.

“We are seeing impacts on the industrial base by several pockets of closure internationally. Particularly of note is Mexico, where we have a group of companies that are impacting many of our major primes,” she said Alcalde publicly shamed some textile and footwear firms, as well as a department store chain, for not obeying closure orders for nonessential businesses.

López Obrador appeared to oppose a $3 billion credit arrangement that a leading business association announced with an investment arm of the Inter-American Development Bank to supply loan-type products for small and medium firms in Mexico hit by the effects of the pandemic.

Inter-American Development Bank and Mexican Business Council (60 of Mexico’s largest businesses) Loans for up to 30,000 businesses.

$12 billion a year IDB says there are 4.1 million small and medium sized businesses in Mexico; they contribute 42% of Mexico’s Gross Domestic Product and 78% of all jobs in Mexico.

Meanwhile, AMLO is cutting the Mexican federal budget and up to 17,000 small and medium sized businesses are expected to take a hit.

The austerity-minded López Obrador had vowed not to acquire new debt, and said the loan arrangement would not be backed by public funds or government guarantees. He said he also didn’t like that business groups had arranged the deal behind his back.

AMLO has no problem on writing off billions of dollars when he shut down construction on Mexico’s new airport and pledging millions of pesos to build a new oil refinery in his home state, or in starting a “Maya Train” in Yucatan or in founding a national bank for poor people -- but he objects to private people arranging a private loan to help small and medium businesses survive the great national shutdown of business the country has suffered.

AMLO said --“I don’t very much like the way they reached an agreement and want to impose their plans on us,” the president said. “What are we (the government)? Flowerpots, just here for decoration?”

“If it doesn’t cost the public anything, if it doesn’t come from government funds, go ahead,” he added, reminding Mexicans of the numerous past big-business bailouts that average Mexicans had to pay with their tax money.

ALL THIS FROM A PRESIDENT WHO SIMPLY DOESN’T LIKE BUSINESS BUT HANGS ON TO PEMEX, THE NATIONAL OIL COMPANY, A PUBLIC COMPANY WITH A CORRUPT UNION THAT IS SO CORRUPT MILLIONS, IF NOT BILLIONS OF PESOS HAVE DISAPPEARED INTO THE POCKETS OF PEMEX OFFICIALS INSTALLED BY THE PREVIOUS PRESIDENT, ENRIQUE PENA NIETO FROM HIS POLITICAL PARTY, THE CORRUPT PRI.

AMLO appointed PEMEX officials are being asked by the Mexican govt to voluntarily take a 25% pay cut if they make more than $4000 American dollars a month. Why?

Two reasons: The company has been so ripped off by corrupt thievery by politically appointed union and company officials Pemex is on the verge of bankruptcy and is simultaneously being hammered by the world glut of oil that has caused the price per barrel to fall under break even.

“He neither helps nor lets others help,” De Hoyos said of Mexican firms suffering from a drop-off in activity. “But he does lie,” he wrote in his Twitter account, adding the credits “do not, as he said, involve public funds.”

López Obrador has had a rocky relationship with business groups, which he has frequently accused of corruption and hogging power.

QUESTION: HAVING watched rich Mexicans fill airplanes from Mexico City and Guadalajara to Tijuana, who then fill limousines, SUV’s, chartered minivans to their hotels in San Diego like the Marriott, Hyatt, Intercontinental, etc. for years and then observed their shopping in the city’s super-expensive Neiman Marcus, what are they going to do now that Neiman Marcus is on the edge of bankruptcy?

QUESTION: President Trump ordered border crossings with Mexico and Canada restricted  to essential crossings on March 20 resulting in a substantial drop in border crossings from Tijuana into San Diego, so how effective has this “Closing” been?

Yeah, border crossings dropped as did all traffic in Tijuana. The Mexican government ordered many businesses to close; that kept many people home. I live in Mexico, 20 kilometers south of the border in the beach community of San Antonio Del Mar. Normally, it takes me 20minutes to the border gate then, with my rapid Sentri Pass, 10-15 minutes to cross the border.

Sentri pass. Anything to declare? New normal, two lanes instead of 8. 25-40 minutes instead of 10-15 minutes. Few Mexican license plates. Shutting down sentri gates at Otay because of drop off in traffic.

The horrible rip-off President Trump claims is the “worst ever” piece of trading crap that has allowed Mexican thieves to steal billions of dollars from the U.S. treasury is done, buried forever by Trump’s fabulous negotiating skills.

Finally. Trump didn’t negotiate it. NAFTA was the best trade agreement the US has ever made. This new version is simply a slight improvement, improved over NAFTA by modern adjustments to the 25 year old NAFTA.

Will the US sell moreto Mexico and Canada than under NAFTA, probably a little but not like the percentage increases year-to-year under NAFTA.

If no one noticed, it was the Trump Administration that asked for Coronavirus closed Mexican factories to open because American industry and supply chains are threatened by closure of the Mexican industrial sector that is of NAFTA origin.


Brought to you by Raoul Lowery Contreras of The Contreras Report: Business México